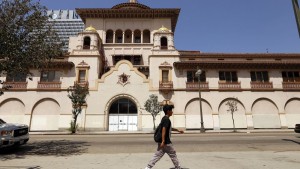 In effort to expand well beyond its Arizona footprint, Arizona State University has agreed to lease the century-old former headquarters of the Herald Post, formerly owned by William Randolph Hearst.

According to a recent post by the LA Times, “Noted investors in the property include LeBron James and arnold Schwartzenegger, James and Schwarzenegger are among the investors in Main Street Advisors, a Santa Monica investment advisory firm that is part-owner of the now-shuttered building on Broadway at 11th Street. Schwarzenegger supported the investment after a pre-purchase tour led to his reminiscing about filming the 1999 thriller “End of Days” there, said Main Street Advisors founder Paul Wachter.”

“We look for things that capture the imagination of our clients,” Wachter said. “It wouldn’t have been as interesting to [buy] a different building.”

The new downtown Los Angeles AS